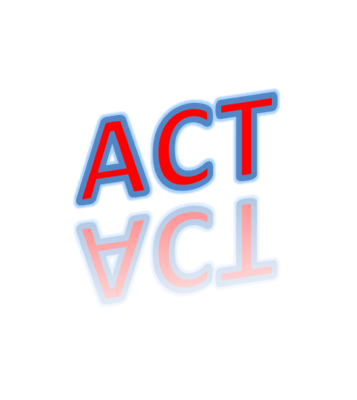 Coming from a primarily cognitive-behavioral background, I am quite happy to see “the third wave of behavior therapy” (Hayes, 2004, p.16), as Hayes and others have called it, emerge to address some of the missing links, so to speak, of a somewhat strict and inflexible cognitive-behavioral approach to treatment.  This third wave of therapies, including Acceptance and Commitment Therapy (ACT – pronounced as a word, not an acronym) and Dialectical Behavior Therapy (DBT – Linehan, 1993), focus on mindfulness and acceptance, both of which are influenced by the traditions and practice of Zen Buddhism.  I have used meditation in my own life for quite some time and, while integrating this practice with what I know about cognitive-behavioral theory and methods, have found it quite effective in dealing with the day-to-day stresses of life in general.  I will now focus on ACT in general and the readings specifically to elaborate on my reactions to the philosophy of Functional Contextualism, Relational Frame Theory (RFT), and ACT as a treatment modality.


Having read Walser and Westrup’s text (2007) on ACT for Post-Traumatic Stress Disorder on a couple of occasions, I still did not have a good grasp of ACT and how it functioned as a therapy.  It was a bit too fuzzy for me until I read Hayes (1999) book and the assigned reading by Blackledge (2007).  Blackledge was able to state the concept of cognitive defusion in such a way that it really made sense to me for the first time.  He used relevant and creative examples, explaining the concept in simpler terms than Hayes had done previously.  He also expanded on defusion techniques (e.g. the I-Here-Now concept and violation of speech parameters) in a way that really made me understand the role of context in language and how defusion (and context) play a role in the, very behavioral, application of exposure in ACT.  It was kind of an “ah hah” moment for me that really made me understand what Hayes and others have been trying to say for so long, that you can use some very behavioral techniques in a context of total acceptance to reduce anxiety and other problematic emotions.  Blackledge (2007) also helped me understand RFT much better than Walser and Westrup (2007) or even Hayes (1999 & 2004) have tried to do.  Maybe Hayes has become so enmeshed with his theory and understands it on such a complex level that it is difficult for him to explain in easily understandable terms.  In any case, the Blackledge article was an excellent choice and really helped me understand ACT in general and cognitive defusion in particular much better than I have in the past.


The Blackledge and Hayes (2001) article is quite informative, helping clarify the connection between language, experiential avoidance, cognitive defusion, and exposure in ACT.  It also helps clarify the difference between ACT and CBT, where thoughts emotions, and memories are simply accepted as such rather than trying to modify them as is done in the cognitive model.  The fact that language and rule-governed behavior are additive in the sense that what we have experienced (behavior, thoughts, emotions, memories, etc.) can never be eliminated, makes me think that a contextual, acceptance-based approach may be a way to get the mind to create positive, novel, experience-based memories founded on acting in accordance with personal values.  The vignette, although rather brief and somewhat simplistic, was a good illustration of ACT at work and helped clarify some of the concepts and techniques of the therapy.  After reading the two Blackledge articles (2001 & 2007) specifically, I have a much greater understanding of and appreciation for ACT and am quite excited about the possibilities this type of approach offers to clinicians and clients alike.  ACT is a treatment approach that can be applied to a diverse number of people and disorders, and is blind to cultural influences in the sense that the therapist accepts the client as they are and helps them establish values that are consistent with their culture of origin, personal experience, and unique view of the world.


Eifert et al (2009) described their protocol for working with anxiety disorders, which they call the Act for Anxiety program.  In their program, they introduce value and goal related work much earlier in the process than Hayes (1999 & 2004) has described.  Hayes has noted that the therapeutic steps in ACT are fluid and can be shuffled or adapted based on the experience of the therapist and the needs of the client, but I think it may be a little early in treatment (no later than session 3 according to the authors) to focus on values and goals.  Since they are proposing a 12-session treatment protocol, I would think that focusing on the skills involved in addressing creative hopelessness, cognitive defusion, and self as context would provide a better foundation for value and goal work than vice versa.  Additionally, in session four and five, they propose an “acceptance of anxiety exercise” where clients are “encouraged to make full contact with the experience of anxiety” (Eifert et al, 2009, p. 373).  I doubt that the client will have a solid enough grasp of mindfulness and acceptance at this point in therapy to allow them to experience the kind of therapeutic exposure required for a successful outcome.  It seems far too early for such an intervention and could possibly do more harm than good at this point in treatment.  I also found it confusing when they later referenced “getting ready to face anxiety with mindfulness acceptance” in relation to the goals of sessions six and seven (Eifert et al, 2009, p. 374).  If clients are expected to make full contact with the experience of anxiety in sessions four and five, what is the difference in how it addressed in sessions six and seven?


Which brings me to the article by Forman et al (2007) and the randomized controlled trial (RCT) involving ACT and Cognitive Therapy (CT).  The subjects may have been randomly assigned to treatment, but to call this a “controlled” trial is, to put it mildly, a bit of a stretch of the imagination.  First, if you want to compare your treatment (in this case ACT) to the “gold standard” (CT), you probably should not start out by bashing cognitive therapy.  On one hand, they site all of the outcome studies pointing to the efficacy of CT, but, on the other hand, consequently site the research that points to a “lack of consistent support for postulated cognitive mechanisms of CT” (Forman et al, 2007, p. 774).  When they cited the research supposedly showing the effectiveness of ACT, the authors quickly pointed out that all of the studies lacked an active comparison group and were conducted by researchers with an allegiance to ACT, not a very convincing argument.  The therapists used in the trial who were trained in ACT also received six hours of additional training (50 percent more) when compared to the therapists trained in CT, so they would probably be more competent than those providing CT.  Therapist allegiance was also (supposedly) controlled by “asking” the therapists (before they entered the study and knew little about either ACT or CT) which treatment they thought would have better outcomes, so that control goes out the window.  So, in the end, the authors determined that ACT was as effective as CT, which they stated in the beginning of the article was not very effective to begin with.  If you want to compare your treatment option to another model, you should probably say nice things about the comparison if you want to sway readers into accepting your proposal.


Finally, Hayes et al (2006) did an excellent job of laying out the framework for ACT, explaining the basic philosophy, principles, and processes in a succinct and easily understandable manner.  I really don’t have much else to say other than the fact that they point out an inconsistency I have noticed in Hayes’ other works (1999 & 2004).  Hayes developed ACT as a therapy and began research back in the 1980s, but did not develop the philosophy (Functional Contextualism) and theory (Relational Frame Theory) until the late 1990s and early 2000s.  Even though I think ACT in general is quite thought provoking and even a possible breakthrough in how we approach human suffering, it concerns me that the philosophy and theory were developed to explain the treatment approach.  It’s the old chicken or egg (or cart before the horse) analogy all over again.  I am not saying that ACT is not a valid treatment modality because of this switch, I am only saying that I believe ACT would have more credibility (to me anyway) if the philosophy and theory had been developed or hypothesized first.